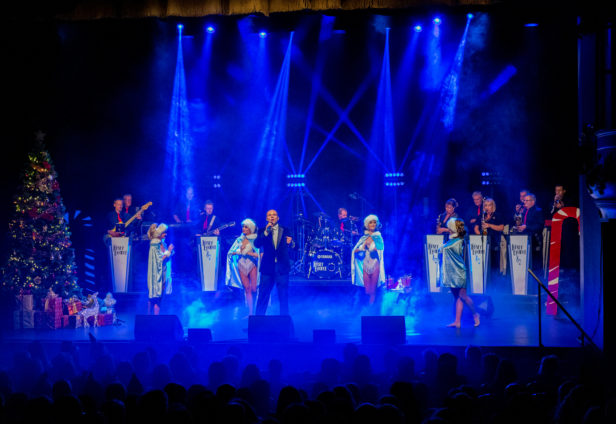 Back by popular demand at the Jersey Opera house for their 4th consecutive year, The Jersey Bounce are back in town with their incredible, Christmas show!

Join Jersey’s biggest & best show band for non-stop festive fun and a show that packed with all the festive trimming’s! They will be performing all the seasonal classics, such as, ‘Santa Claus is Coming to Town’, ‘Jingle Bells’, ‘Fairytale of New York’, ‘I Wish it could be Christmas everyday’ and much, much more! Plus, adding plenty of sparkle to the Christmas Tree, will be the fantastic JLEE dancers!

As if this wasn’t enough, joining them on stage is and ensuring everyone enjoys a ‘Magical’ evening, is their special guest, Jamie Raven! Jamie burst onto an unsuspecting world during the 2015 series of Britain’s Got Talent. His magic amazed audiences and even made Simon Cowell exclaim, “I now actually believe in magic!” on route to finishing, in his own words as “Top Human”.

His online videos from Britain’s Got Talent and other subsequent television performances have now been seen over 500 million times, making him one of the most watched magicians in the world today.

In November 2015, Jamie headlined “The Illusionists” at The Shaftesbury Theatre, which went on to break the box office record and in doing so became the most successful Magic show ever in the history of London’s West End! Following the incredible success of his live shows around the globe and countless television appearances, he was also invited to St James’s Place to perform privately for HRH Prince Charles as part of last year’s, 2018 Christmas celebrations.

This promises to be another amazing night out! ‘The Bounce’ will be aiming to get the isles ‘rocking around the Christmas tree’, as only they can! For all fans of live music and show stopping entertainment, this event is a must and after their sell-out Opera House Christmas show’s here in 2014, 2016, 2017 and 2018, we are sure tickets for this will be the hottest in town!

So don’t delay and contact our Box Office today!

Please note this event is for ‘one night only’ so tickets are limited, group discount is available.

For group bookings purchase 9 tickets and get 1 FREE!