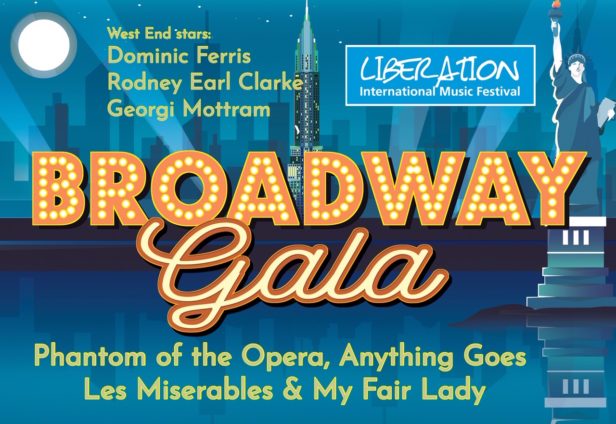 A very special evening for lovers of Broadway, Gershwin and popular music theatre. This outstanding and popular programme will feature music showcased on Broadway from Gershwin’s Rhapsody in Blue, Mary Poppins, My Fair Lady, Hans Christian Andersen, Phantom of the Opera and Les Misérables.  Conducted by Dominic Ferris, with performances by Rodney Earl Clarke – a recipient of multiple international accolades and awards, soprano Georgi Mottram, with the 50 piece Jersey Chamber Orchestra, the Jersey Sings Choir, and a special appearance by the 2016 JADC cast of Les Miserables.

Hailed by Gramophone as a ‘singer to be watched’, Rodney Earl Clarke is recognised for his versatility with a speciality for Broadway shows. Recent appearances include Carmen Jones at the Royal Festival Hall and Gershwin’s Porgy & Bess under the baton of Sir Simon Rattle and the Berlin Philharmonic.

Jersey born Georgi Mottram trained in Opera at Trinity Music College in London. She made her West End debut at the Adelphi Theatre in Thoroughly Modern Millie and starred in Les Miserables and Jesus Christ Superstar at the Jersey Opera House.

Dominic Ferris’ collaborations with the Royal Philharmonic Orchestra have sold over 3 million albums worldwide. He conducted the sell-out performance of Les Miserables at the Jersey Opera House in 2016 and is delighted to return for an evening of Broadway glamour!