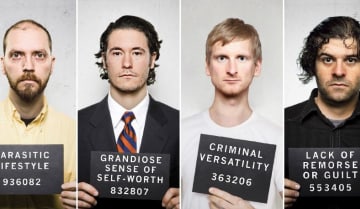 Over the past decade, the condition of psychopathy has garnered a lot of public interest with shows such as Dexter and Killing Eve. This academic talk, citing statistics, research and brain scans, will go beyond the basics and will expand the audience’s knowledge and understanding of the condition. What’s the difference between a Sociopath and a Psychopath? Can psychopaths cheat lie detectors? Is it true they cannot be treated?

It’s believed that psychopaths make up 1% of the general population, yet they account for up to 25% of the US male prison population (Hare, 2003). Consequently, the majority of this talk will focus on the link between the condition and criminal behaviour. However,  Jennifer will discuss also address the hotly-debated concept of the ‘Good Psychopath’. Do they exist? Can you guess which professions have a high prevalence for psychopaths?

Jennifer will discuss fascinating facts about the condition which have not made it into mainstream media, as well as giving an in-depth look at the neuroscience of the disorder.

The talk will also explore the phenomenon in relation to ‘psychopathic’ children: how early do the signs emerge?

Jennifer will draw on real-life cases that you’ve never heard of before to help you develop the skills to identify how a typical psychopath behaves and how to identify one. You will also get opportunities to watch videos of various psychopaths in action, giving you the chance to observe how they behave and think. What are the tell-tale signs which give them away? Are You a Psychopath? Take a screener on the night for fun!