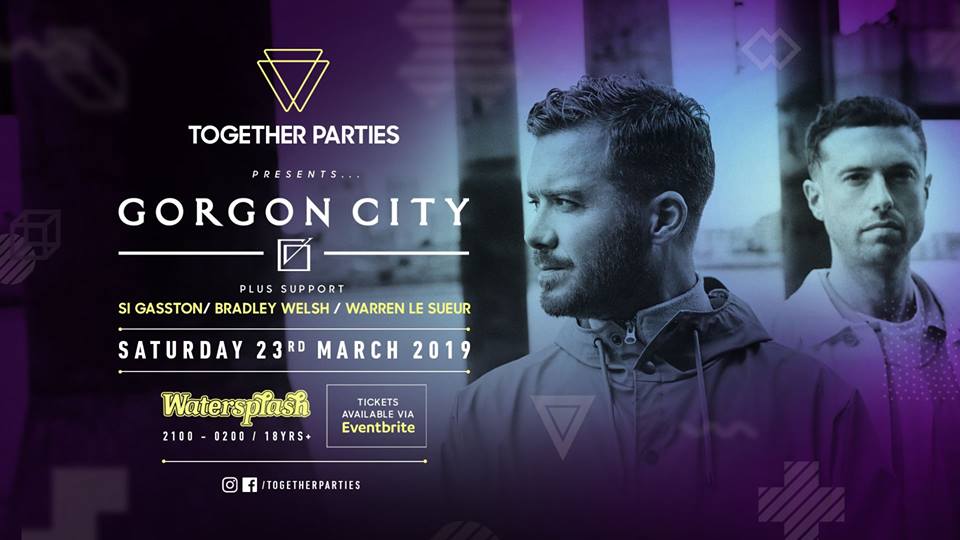 We are buzzing to announce to you one of the most unmissable Splash nights of the last few years! Featuring one of the elite house acts on the planet, making only their second appearance ever in Jersey, having conquered the house world with their trademark bass-driven sound and addictive vocals, which also saw them take over the charts and radio airwaves. Making them one of the hottest electronic music acts ever to come out of the UK!

Another sure fire sell out is on the way on Saturday 23rd March as TogetherParties bring you the incredible GORGON CITY up close and personal inside Jersey’s most historic night club!

Signed to the infamous Black Butter Records in 2012, Kye and Matt’s rise to the top of the game was meteoric with their 2014 release ‘Sirens’ spawning some of the biggest house anthems of the decade, including the iconic tracks ‘Ready For Your Love’, Unmissable’ and ‘Go All Night’ – with the album scoring them 6 UK Top 20 singles!

Since then they have continued to consistently produce more huge house anthems than almost any act in the country, with tracks like ‘All Four Walls’, ‘Real Life’ alongside Duke Dumont and ‘Imagination’ all added to their impeccable back-catalogue of dance floor fillers!

Equally adept at catering to the underground scene, Gorgon City have showcased their prowess for more rugged, minimalistic beats, through club-orientated releases, on Crosstown Rebels and Suara, proving their diversity in both sides of the scene.

Their huge success has seen them become one of the most in demand house acts in Ibiza and right across Europe, and they are one of the few UK house acts to break the USA – selling out multiple tours as well as appearing at some of their most famous festivals!

Our last hotel gig at the Royal Yacht with Gorgon was one of our fastest selling shows of all time and completely sold out weeks in advance and we have been wanting to bring them back for you ever since! This one is going to fly, and we are fully expecting another early sell out!

Grab your tickets now whilst you still can. Going to be one of the nights of the year! Big time house music returns to the Splash, make sure you’re on board!

HOUSE IS BACK AT THE SPLASH – BIG TIME

Tickets > https://housesplashspecial1.eventbrite.co.uk
18yrs + Above . No Refunds