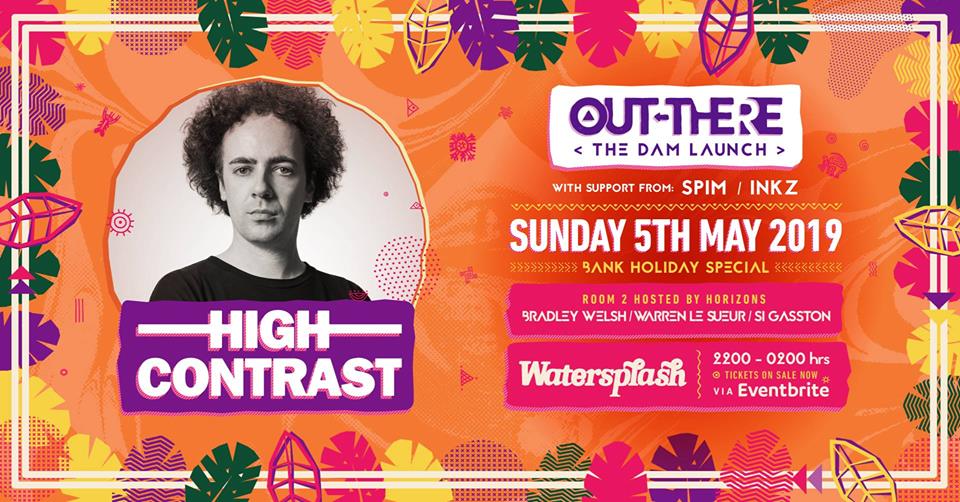 On Sunday 5th May we’ll be joined by one of the true pioneers of the drum and bass sound, one of the genres most respected artists and a man who was a key figure in the emergence of the legendary Hospital Records. The label he called home for much of his career, where you will find his most treasured releases, which will be remembered as some of the greatest of all time in drum and bass.

Join us at The Splash as we kick-start our journey towards The Dam this summer with one of the true dnb elite, and one of the most must-see DJs on the planet, the legendary High Contrast!

With a career spanning almost two decades, High Contrast’s place at the top of the drum and bass scene has never been in doubt. A man who is responsible for more huge dnb anthems than almost anyone alive, and who seems to return with better offerings each and every year!

With tracks like ‘Days Go By’ and ‘If We Ever’ already considered seminal dnb tracks, alongside countless other High Contrast productions. This past year has seen both tracks reworked by High Contrast and Unglued respectively, both lighting up the scene in spectacular fashion!

His prowess as a musical mind and producer is internationally recognised both in and outside of drum and bass. With his talents regularly sought out for high profile projects – such as his involvement with Danny Boyle’s epic London 2012 Olympics Opening Ceremony, as well remixing duties for some of the biggest names in music including the likes of Adele, Jorja Smith, Calvin Harris and Eric Prydz to name but a few!

There aren’t many artists who made such an undeniable impact on drum and bass, maintaining their place as one of the leading figures on the scene for so long! This one will be unmissable, High Contrast sets are a thing of beauty and we cannot wait to welcome him back to the Splash alongside the legendary Dynamite MC for this one!

Support in the main room will be provided by two of Jersey’s finest selectors the brilliant Spim and Inkz, bringing you pure drum and bass goodness from start to finish!

We’ll also have a Room 2 takeover from our Horizons stage residents, bringing you the big house sounds of summer downstairs in The Bassment at The Splash!

This will be one of those huge Bank Holiday Splash nights to remember! Sunday 5th May is the date to get in your diaries, as the Splash is taken over once again by true dnb royalty!

Tickets available now via Eventbrite on the link below. Grab yours now!