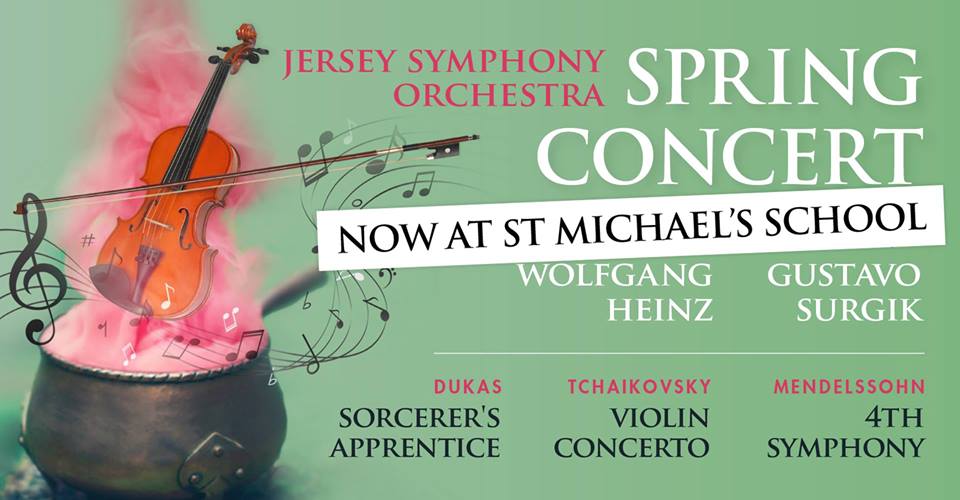 The Jersey Symphony Orchestra‘s spring concert will be conducted by Wolfgang Heinz. Our guest soloist Gustavo Surgik will play Tchaikovsky’s Violin Concerto composed in 1878. It is believed to be one of the greatest works written for the violin dedicated to wealthy widow Nadezhda von Meck who became his patron.

The concert begins with The Sorcerer’s Apprentice by French composer Paul Dukas completed in 1897. It is best known from the Walt Disney 1940 animated film ‘Fantasia’ which was hugely popular.

After the interval, the Orchestra plays Mendelssohn’s 4th Symphony, also called the Italian Symphony. Mendelssohn said that is was “..the jolliest piece I have ever done, especially the last movement…”.

Tickets are now on sale again all at £25! If you have previously purchased tickets, you should receive an automatic refund, and then purchase your new ticket. Some tickets will also be available on the door.

Sound and visibility should be good all over the hall.
There is plenty of parking, but we suggest you bring a torch as the access to the hall may be only dimly lit.

Please aim to arrive in good time, to be seated by 7.25 for the arrival of His Excellency Sir Stephen Dalton.

Please note there are some steps between the car park and the hall, and regrettably, wheelchair access is very limited. Please call Anne on 01534 852427 for more information on accessibility.