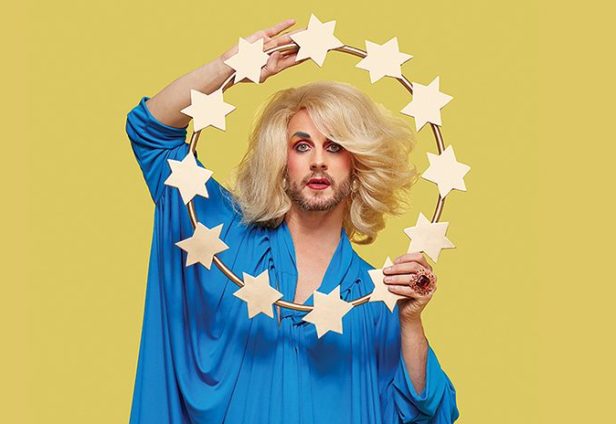 ‘Jonny Woo could stop a war with love’ The Scotsman

Drag Superstar Jonny Woo and Olivier Award winning composer of Jerry Springer the Opera, Richard Thomas bring you this sequin spangled musical ripped straight from the headlines. This is an uproarious yet seriously glamorous satire about the referendum of 2016 and the ensuing furore of ‘Brexit’ with a star-studded cast of top Fringe talent. ‘In’ or ‘Out’? There’s a hell of a lot to sing about.

Jonny Woo’s All Star Brexit Cabaret was a smash at The Edinburgh Fringe Festival 2018. Jonny Woo, the ‘king and queen’ of London’s alternative scene and musical theatre’s ‘enfant terrible’, Richard Thomas, have come together to write a score that is jam packed full of unforgettable songs including ‘Referendum-dumb’, ‘The Great Cunting Debate’, ‘Swivel Eyed Loon’ and ‘The Ballot Box Ballad’. Expect glittering star turns from Boris Johnson, Angela Merkel, Nigel Farage of course and a cameo from Theresa May. Neither Woo nor Thomas intends to bore you with the same old rhetoric or statistics, rather thrill you with hi-jinx, big laughs and unexpected emotional clout.

The show is performed by Jonny Woo, Richard Thomas, Sooz Kempner and Jersey’s own, Adam Perchard