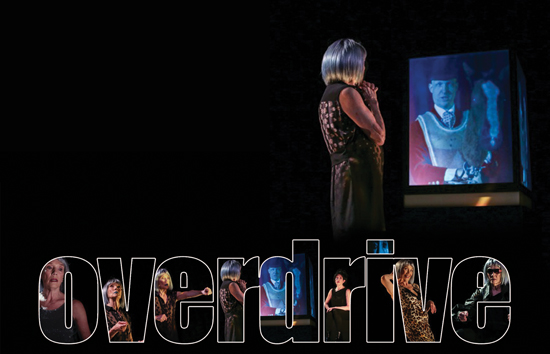 Based on William Gibson’s cyberpunk cult novel ‘Mona Lisa Overdrive’, ‘Overdrive – a Cyber Fairytale’ is based on ‘Frankenstein’ for the digital generation. A humanoid Artificial Intelligence welcomes us to the near future where sentient machines and humans share a world. Virtual permeates real and the ‘meat world’ of biology looks to a digital hereafter where consciousness is coded and love can live forever. Five female voices – three real, one virtual and one somewhere between tell their stories. A Japanese schoolgirl, a Hollywood Sense/Net star, a whore, a street samurai and an avenging ghost – five trajectories through time and cyberspace colliding in an extraordinary tale of traded identities, lost mothers, murderous fathers and dreams of immortality.

God now moves upon the face of the Matrix. Heaven can be found in the eternity of a simulated world. So where does that leave the species? The piece asks what it is to be human in the deathless world of the digital future. In a scape of light and sound, acclaimed actress Linda Marlowe gives us a real world act of virtuoso storytelling in Di Sherlock’s revisiting of this iconic Sci-Fi classic.