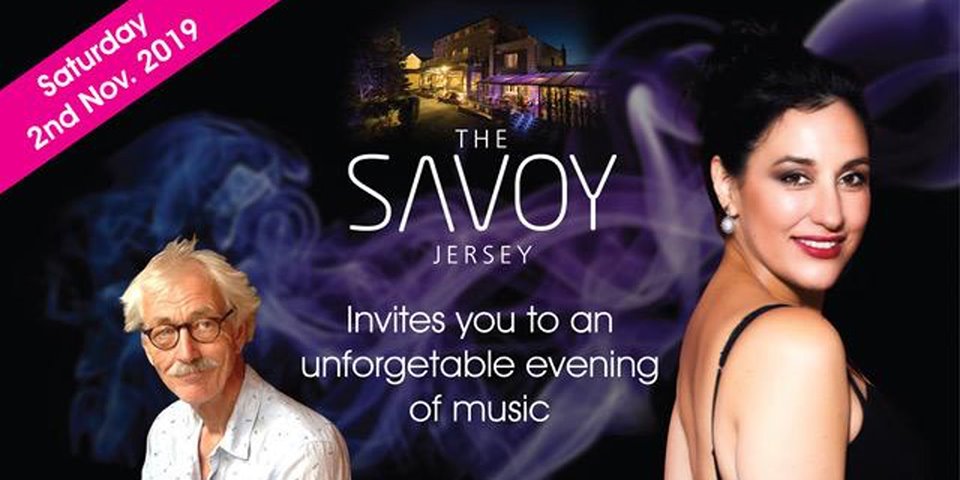 For One Night Only! (dinner and drink included)
Peter Schön, renowned Dutch Pianist, alongside acclaimed international vocalist Adria Godfrey “The Savoy Hotel Jersey presents an evening of unforgettable music led by Peter Schon and Adria Godfrey.
Peter Schon , born in Holland, an accomplished musician ( keyboard, piano, vibes), arranger, producer, composer, and writer. He was educated at the Conservatoria of Haarlem and in Rotterdam.
Peter has played in many bands including the band of Nina Hagen and was involved in many Dutch productions as well as recording with saxophonist Stan Getz in the album Forrest Eyes. In the early eighties he organised a project called Batida which focused mainly on music from Latin America. This Latin and fusion band played successfully for a decade. Peter lives in Portugal where he runs a recording studio and performs with various artists such as Marito Marques, and is currently working on a solo piano album. His musical work takes him all over the world.
Adria Godfrey has been singing since the age of 22. She spent time in Cuba among the Buena Vista Social Club crowd as well as regular slots at The Jazz Cafe in London and she organised recitals at various galleries and private functions. Born in the Caribbean coast of Colombia where music played a big part in her musical life.
The “filin” has been a great influence in Adria’s singing deeply affecting her emotional interpretive style. That manner she has of communicating with audiences paints an intimate atmosphere. Adria lives in Jersey and is the lead singer of “Alegria” a Latin acoustics band which features at The Savoy and also organises concerts in Jersey and in Europe.
Music influenced by Latin, European, African and Arabic rhythmic traditions will make this evening uplifting, defiant, rich and inventive.”
Join us for an unforgettable evening of music!
Dress Code; Smart Casual.
Please arrive at The Savoy Jersey Hotel starting with 18:00 in Roberto’s Bar for pre-dinner and performance drinks.
The performance will take place in the Savoy Suite event room.
Food and drink:
A glass of Charles De F. Brut Cuvee is included in the ticket price, together with a two course delicious tasting platter:
To Start :
Salmon Tartare Bruschetta
Caprese Skewer – Cherry Tomato, Basil and Mozzarella
Coconut King Prawns
Prime Irish Beef Slider
Red Pepper Hummus
Goat’s Cheese Lollipop with Pickled Beetroot
Wild Mushroom Arancini
Chicken In Parma Ham
To Finish :
Macarons
Mini Desserts
Cheese, Biscuits and Palate Cleansers