The Mural project started in February 2021, initially I inquired about painting on the Rice Bowl wall having noticed that it had become discoloured and weathered, the parish of St.Clement were delighted with our idea and kindly offered the Pontac bus shelter as well.

That got me thinking about the Grouville Station bus shelter, so I reached out to Grouville and they also authorised a RampArts revamp! 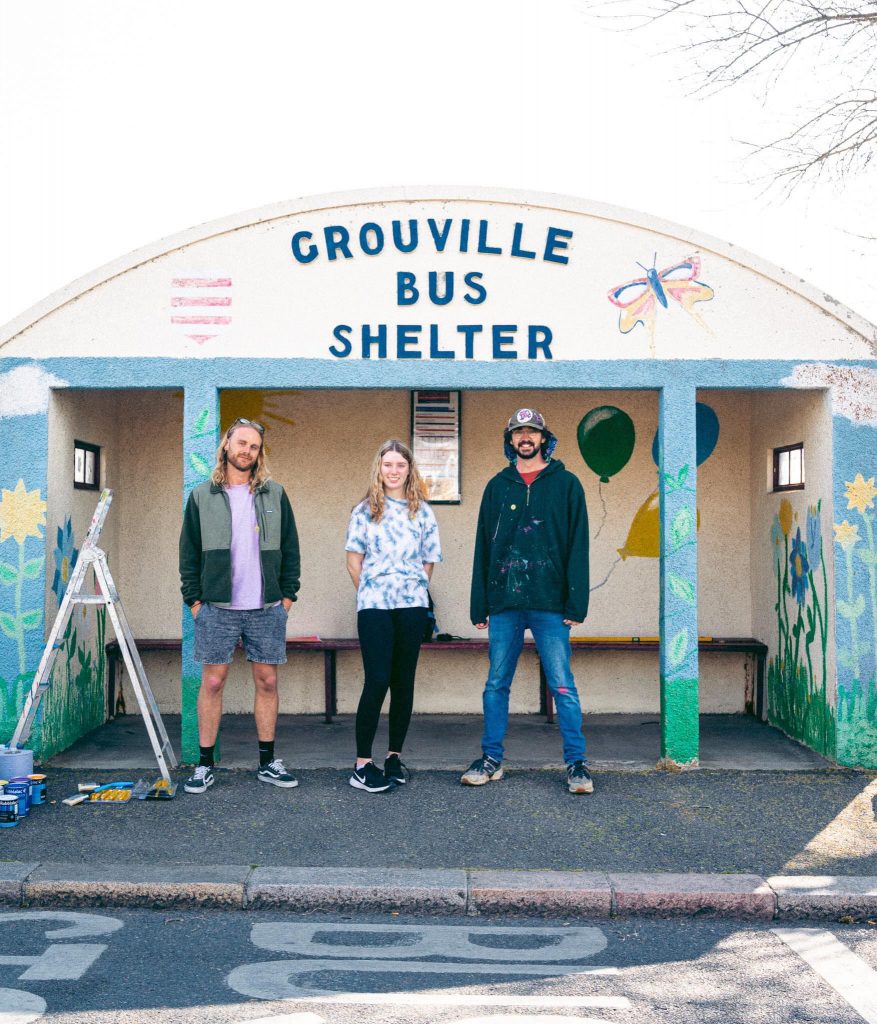 I contacted a few artists I thought would be a good fit for the spaces, I wanted the designs to represent the community and parish it resided in. 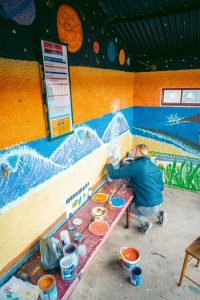 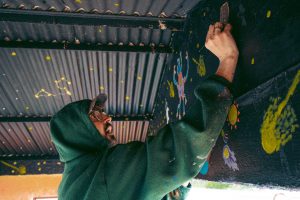 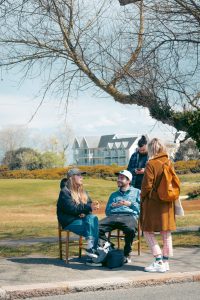 Jacques Le Breton and Christy King collaborated on the Grouville Station Mural designs, their final submission included Jersey landmarks like Gorey Castle, it is colourful and playful and incorporated drawings of spacecrafts and aliens from the nearby Grouville Primary School, we worked with the school and the parish to get sign off and invited the children to come and see their drawings being painted into the mural by the artists. 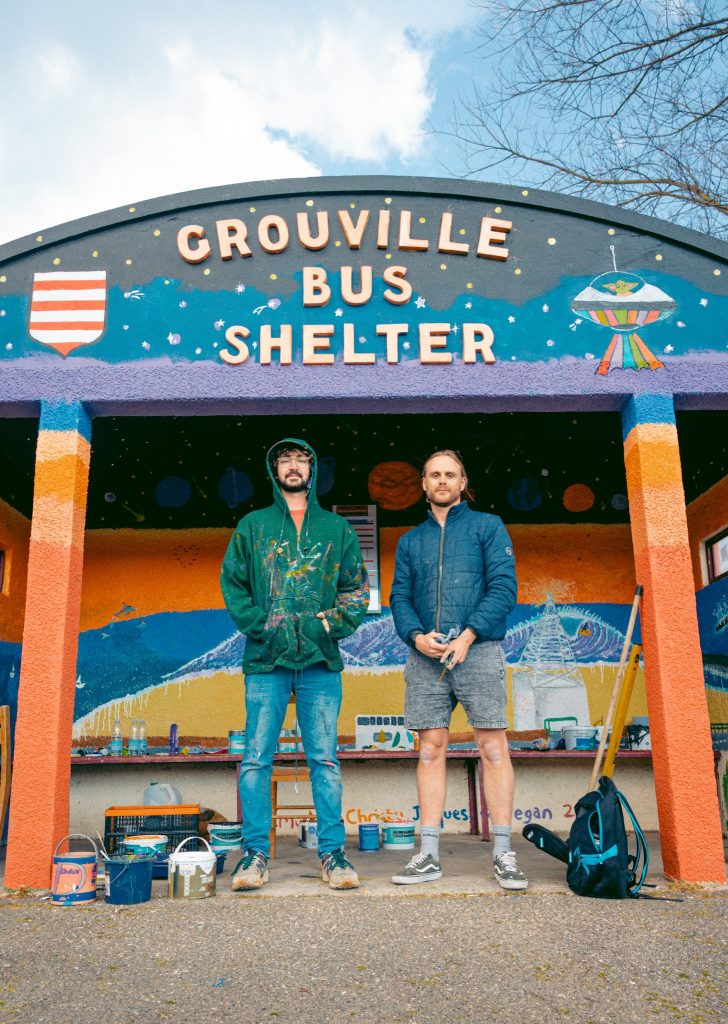 It was a wonderfully positive project, the families and local residents all stopped to say hello, deliver chocolates, and celebrate the transformation. The school now call this their shelter, and we have been privileged to encourage creativity and give the children an out of this world bus shelter! 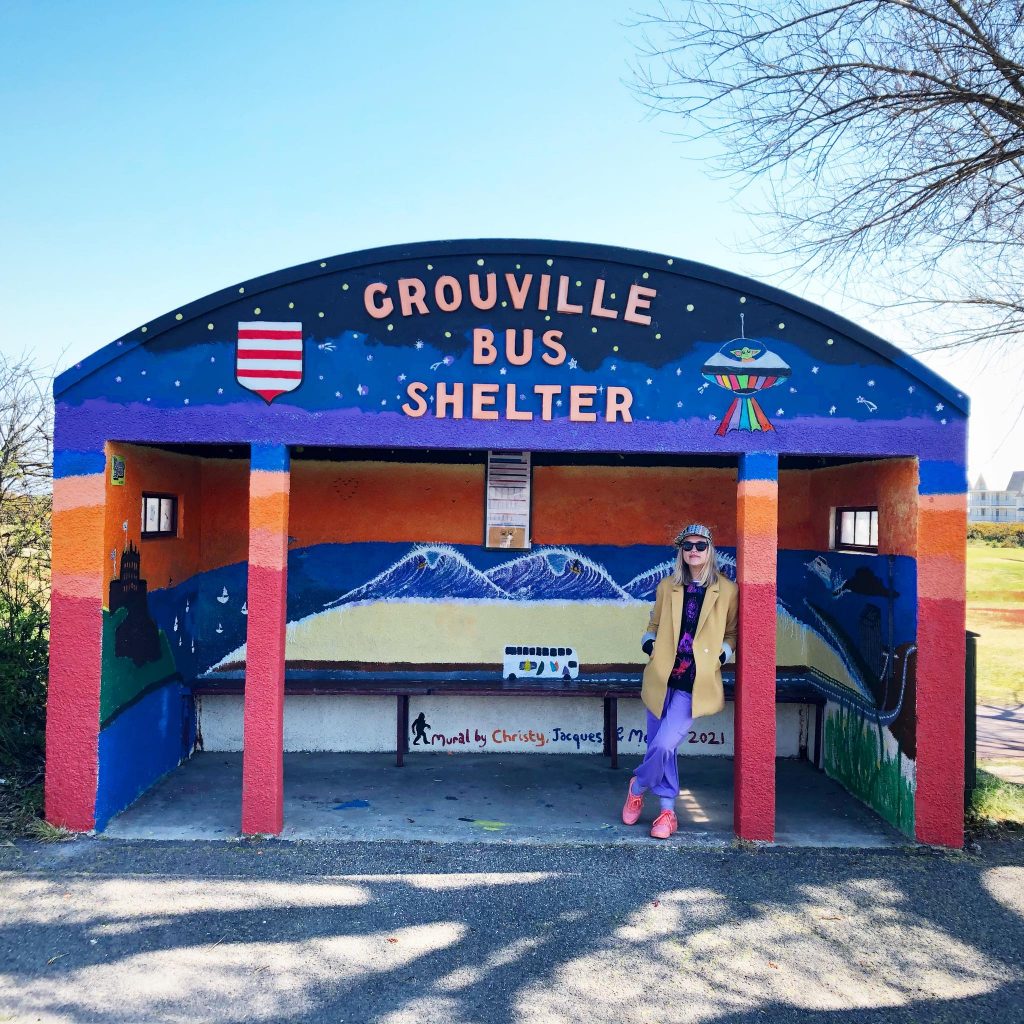 Fast forward a week and we were set to start the Pontac Bus Shelter! Jonny Swift and Rosie Evans collaborated on this design, Jonny sent out a positive message of support to the local fishing industry, which happened to coincide with the French fishermen holding a protest in the waters off Jersey’s main harbour, just days before. 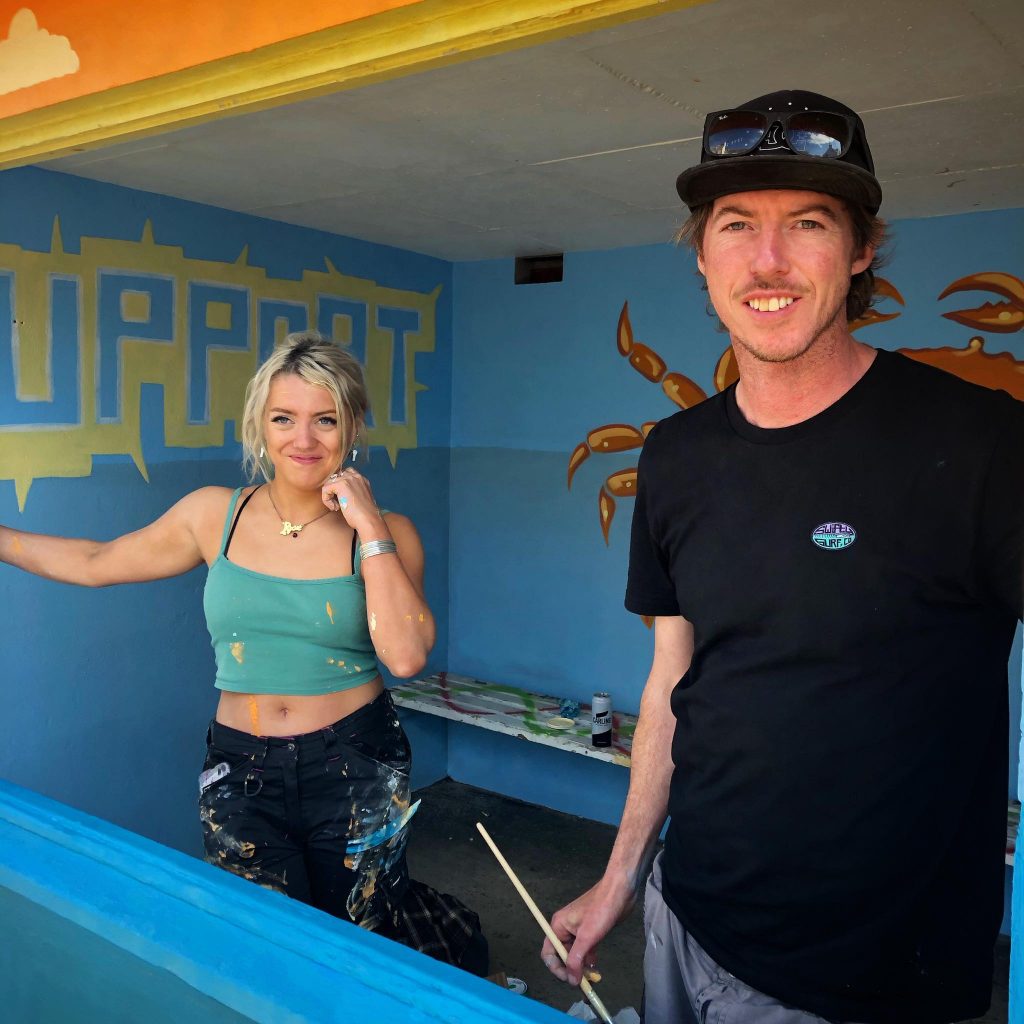 It could not have been timed any better, just when support was needed! Rosie transformed the outside of the shelter into an underwater scene, with a blue and orange gradient of stripes finished off with cartoon clouds, I have been told that this brings smiles to the faces of those on their way to work and makes the experience of getting the bus from Pontac that little bit special. 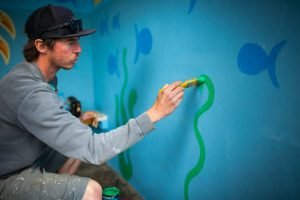 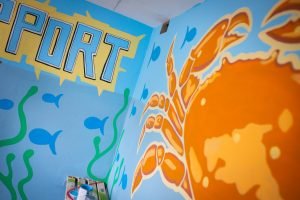 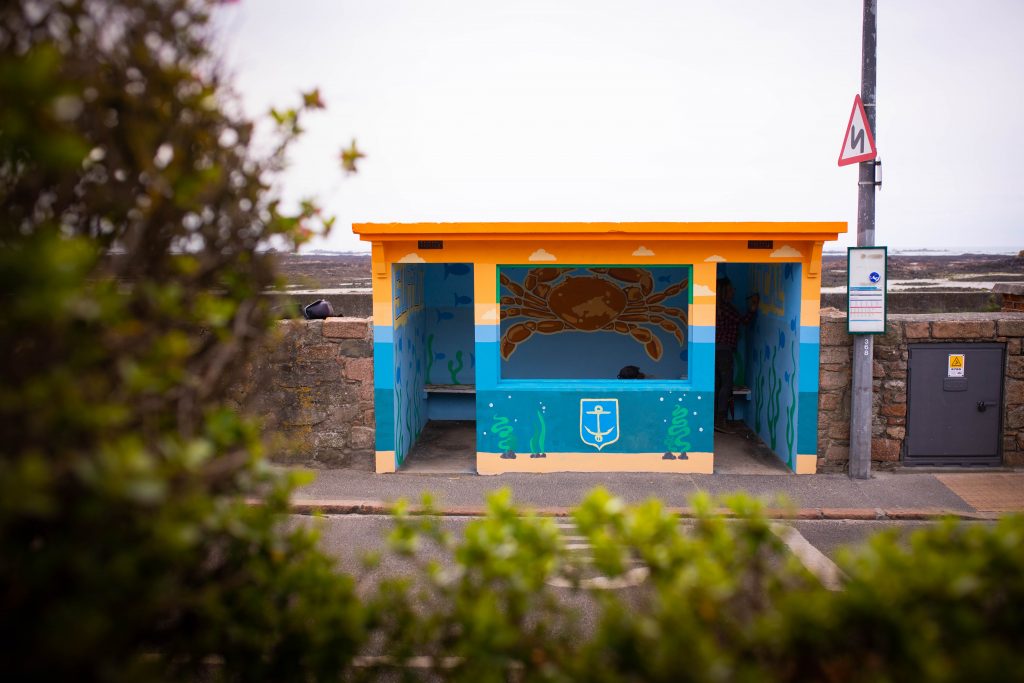 Our next location is the Rice Bowl Wall. Jacques Le Breton has worked exclusively on this design, which was welcomed by the Parish and the murals neighbors Rice Bowl Chinese Restaurant. The final submission encompasses wild birds with Jersey Lilies and Chinese national flower the peony. It will be a prominent piece in St.Clement, and it’s an honor to have been given the trust and nod from the parish to bring make our ideas into a reality. 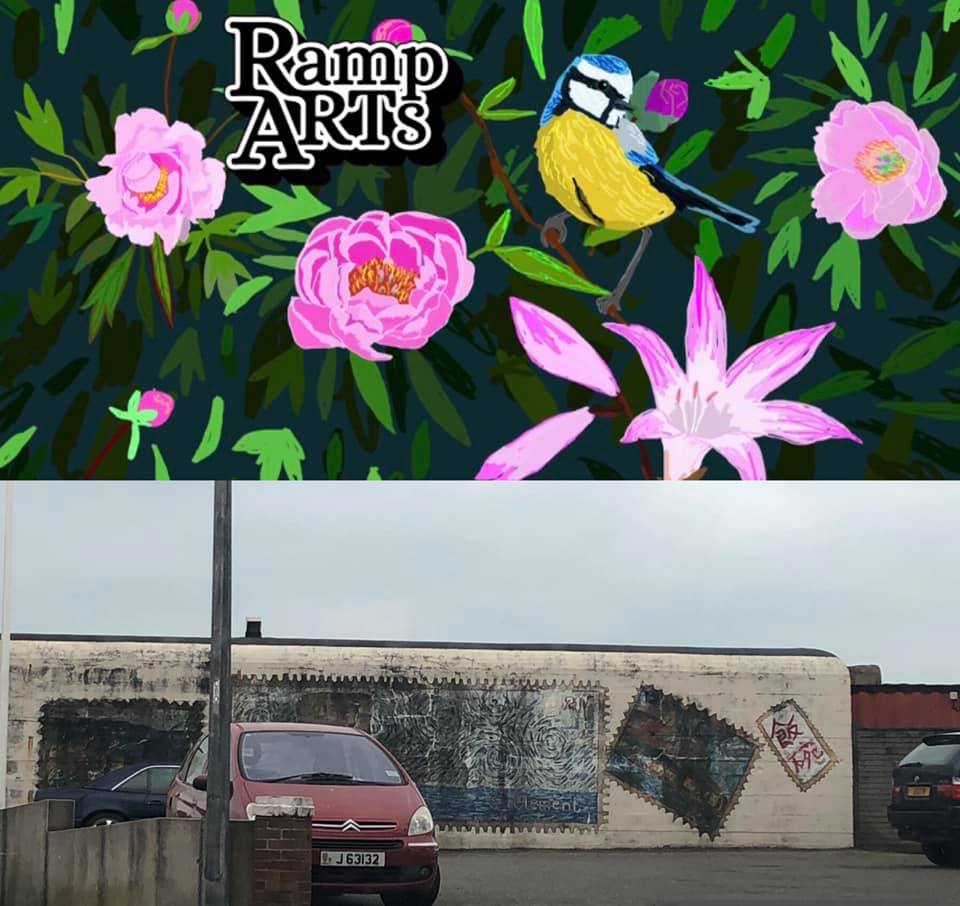 Ah massive and never ending thank you goes out to Robbialac & Cin Paints Jersey, who have sponsored, supported, and encouraged this project no end. Without their professional range of high quality paints, we would not have been able to bring you these colourful upgrades! 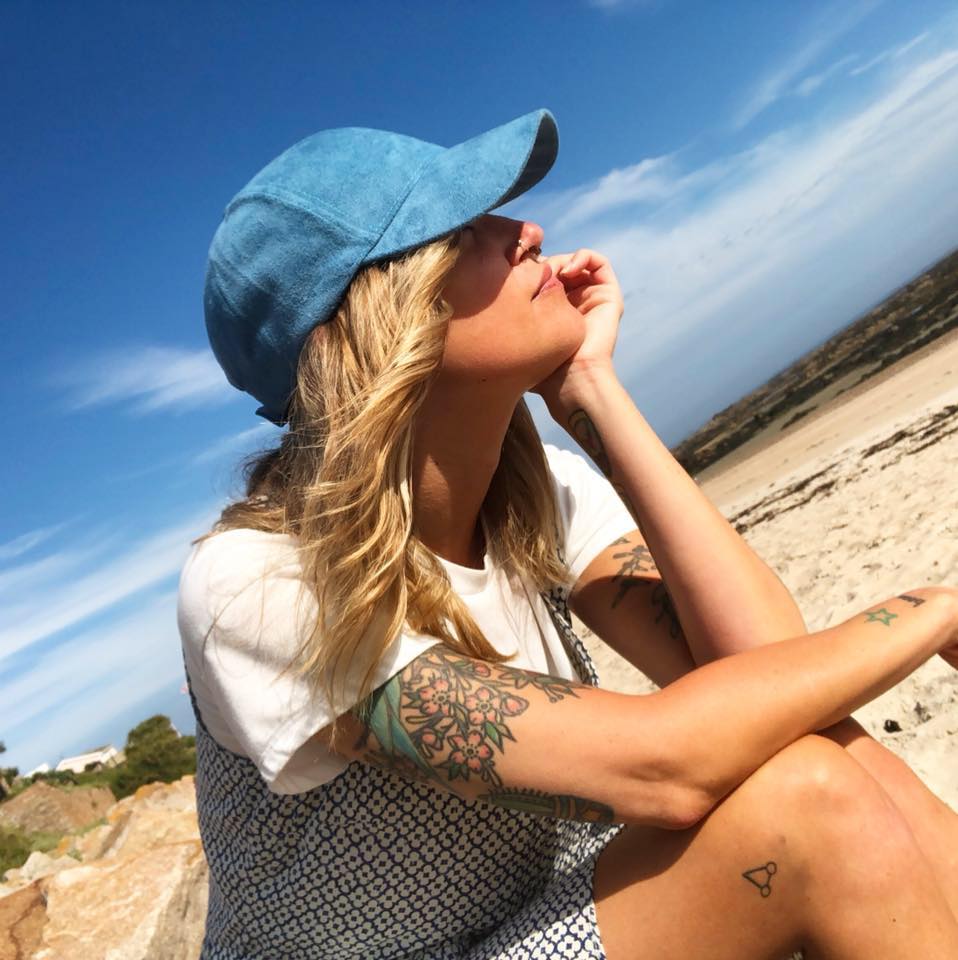 The RampArtists involved have given their creative energy and time into the projects, for which I am so very grateful. We also had a team on site, Jake Mullins videographer capturing the atmosphere and progress, as well as Ross O’Neill designated photographer for the project, and Jody Samantha Photography also asked to pop down to Pontac and grab some shots! Extra hands on deck were Louise Evans, Hope Southam, and our amazing Project trident student Megan who helped out in Grouville!

Our Instagram account is great for following our projects progress and staying up to date with what else we have lined up at RampArts Jersey and our website features our RampArtist profiles to see more of the artists artwork and information about them CLICK HERE:
RampArts Jersey
07829706675