With its unspoiled landscape and unique blend of British and French influences, Jersey really is a place where you can get away from it all. Relax and enjoy the famed hospitality of its people and lose yourself in the island’s winding lanes or on its breathtaking coast 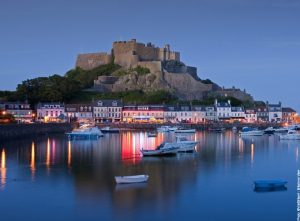 Mont Orgueil overlooks the harbour of Gorey and is also called Gorey Castle by English-speakers and lé Vièr Châté (the Old Castle) by Jèrriais-speakers. In a generally ruinous state at the time of its handover to the people of Jersey by the Crown on 28 June 1907, Mont Orgueil has been managed as a museum site since 1929, although during the Second World War German Occupation (1940–1945) the occupying forces garrisoned the castle and added modern fortifications camouflaged to blend in with existing structures.
La Hougue Bie 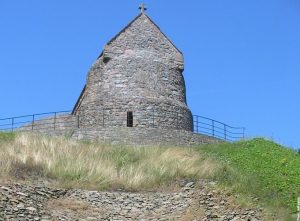 Above: La Hougue Bie
La Hougue Bie is a historic site in the Parish of Grouville. It is a Neolithic ritual site which was in use around 3500 BC. In Western Europe, it is one of the largest and best preserved passage graves and the most impressive and best preserved monument of Armorican Passage Grave group.
Elizabeth Castle 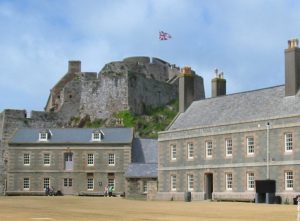 Above: Elizabeth Castle
The construction of Elizabeth Castle was started in the 16th century, when the power of cannon meant that the existing stronghold at Mont Orgueil was insufficient to defend the Island and the port of St. Helier, which was vulnerable to attack by ships armed with cannon. Today, the castle is administered by the Jersey Heritage Trust as a museum site: among the historical displays are the Jersey Royal Militia Museum holding several centuries of military memorabilia.
St Aubin’s Bay 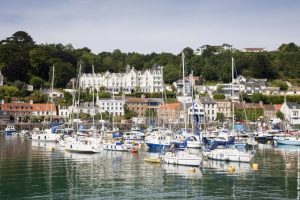 Above: St Aubin’s Bay
St Aubin’s Bay is a beautiful three mile long bay that covers the central part of Jersey’s south coast, stretching from St Helier to St Aubin. St Aubin’s Bay has soft, golden sand along the entire length of the beach and only at the highest of tides is all of the sand covered, and even then it dries out quickly after the tide retreats.
Le Don Hilton 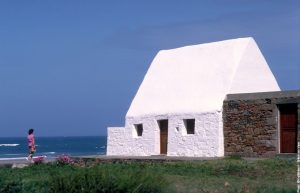 Above: Le Don Hilton
Situated beside the sea wall in St Ouen’s Bay, this distinctive white 18th century building is also known as La Caumine à Marie Best. The building was first mentioned in 1665 and was originally St Peter’s Guard House and Magazine, when the defence of the bay was shared with the Parish of St Ouen. The property was rebuilt in 1765 with a stone vaulted roof to replace the earlier structure, which was blown up.
La Corbière Lighthouse

Above: La Corbière Lighthouse
La Corbière Lighthouse sits at the extreme south-western point of Jersey in St. Brelade and the name means “a place where crows gather”. The rocks and extreme tidal variation around this stretch of Jersey’s coast have been treacherous for navigation and La Corbière has been the scene of many shipwrecks, including the mail packet “Express” on September 20, 1859.
St Helier 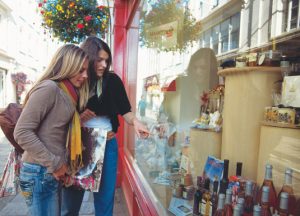 Above: St Helier
St Helier caters for anyone who is compelled to indulge in a spot of shopping during their visit to Jersey. Peruse through your favourite high street names or discover more esoteric specialist shops. Whatever your preference, you’re bound to find the perfect holiday present. 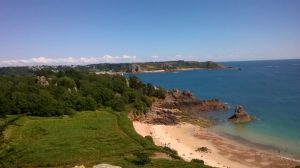 Above: Beauport
Beauport is one of Jersey’s hidden treasures and can only be reached on foot via a path from the top of the cliffs. It certainly adds a bit of mystery to your journey but it is well worth the effort, as it seldom get too crowded, leaving you to enjoy the towering rock pinnacles and beautiful waters.