The skies above Jersey have enjoyed an annual air display for over 60 years, delighting and attracting many tens of thousands of local residents and visitors to enjoy one of the most eagerly anticipated events in Jersey's summer programme of activities. The RAF's Red Arrows will once again showcase their skills in the skies above St Aubin.

Jersey’s St. Aubin’s Bay becomes a massive natural amphitheatre during the International Air Display, with the skies above Jersey coming alive to the sights and sounds of military and civilian aircrafts from around the world. Surely one of the largest free air displays in Europe!

The Jersey International Air Display is organised by Jersey International Air Display A.R.L. in aid of Bristish Service Charities and tourism in Jersey. The air display is an extremely popular part of Jersey’s festival calendar, with visitors from all over Europe flocking to the island’s shores to watch aircrafts from countries such as Belgium, Ireland, France, the Netherlands, Poland, Russia, the United Kingdom and the United States.

Highlights always include the classic World War 2 displays from the Lancaster Bomber and Spitfires.

The Air Display is a free event thanks to generous sponsorship from a number of sources.

Throughout International Air Display week, visitors and locals are treated to a close-up view of aircraft taking part in the display, including legendary airplanes such as the Spitfire and the Lancaster Bomber. There is also a chance to meet the pilots of these iconic planes.

The static air display usually takes place on the south side of Jersey Airport, with display times over the course of three days.

The Jersey International Air Display is an air show which is held every year on the island of Jersey, in the Channel Islands. It normally consists of one air display and two static displays – one at the airport and one in a park in St. Helier.

It is a non-profit making event, and relies upon sponsorship and government funding. The main display can be watched by the public, free of charge.

The Jersey International Air Display and Guernsey Air Display both take place on the same day every year in September.

There are currently two main airshows in the Channel islands:

The Jersey ‘Battle of Britain Air Display’ first took place in 1952. Alongside the air display itself the event also boast two major static displays of aircraft, one at Jersey Airport and the other in Peoples’ Park, St Helier, adjacent to the ‘arena area’ along Victoria Avenue, which for many spectators is the favoured vantage point. This free annual event was renamed the ‘Jersey International Air Display’ in 1997 to reflect a move by the organisers to include a number of international aircraft alongside its traditional RAF participants. 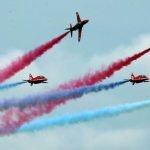 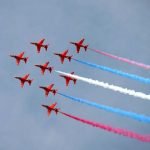 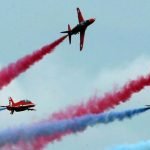 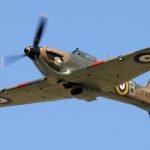