Jersey is famous throughout the UK for its incredible warmth and unbeatable hospitality. Whether it’s the many thousands who choose to live here permanently or the more than thousands of visitors who travel to Jersey every year, everyone speaks of the genuine friendliness of the Jersey people.

Jersey loves its community spirit – and they like to make others feel at home. You’ll find an enthusiastic friendliness in so many places.

Ask a stranger for directions, buy something in a local shop, eat or drink in a pub or restaurant or put on the kettle in your workplace kitchen and you’ll be met with a smiling face and a friendly “Let me help”, “Tell me more about yourself” or “How are you?”

Although we certainly have a strong national identity, this doesn’t stop us from embracing new cultures and new people.More than 6 languages are spoken in Jersey; from Jèrriais to French, Portuguese to Polish, Latvian to Romanian, these languages reflect a modern and inclusive Jersey. Jèrriais, sometimes referred to as “Jersey French” or “Jersey Norman French”, a variety of Norman, was the dominant language of the Bailiwick for most of its history.English has increasingly become the language of education, commerce and administration After all, we’re a rich and diverse country which sees many different cultures from across the world living in harmony together.

We love a party

Jersey knows how to party – and extends an invitation to all. From Vibrant Music events and Film Festivals to Local Charity Fundraisers and Street Fairs, and the more traditional Heritage and Liberation Day celebrations,

Jersey plays host to a number of festivals throughout the year so whether you have an interest in history & heritage, music, the arts or food & culture there is always something to do no matter what time of year you visit. With a catalogue of other events around the island you can rest assured that you will see the very best that Jersey has to offer

There is always a fun event to attend.

Getting together, sharing good times, ‘having a blether’ and welcoming others with open arms give Jersey its reputation for being a happy and friendly country.

Jersey has produced a large number of well known people across all industries from philosophy, music, film and science. How many of these do you recognise?

Lillie Langtry, actress (1853–1929)
Emilie Charlotte Langtry (née Le Breton; October 13, 1853 – February 12, 1929), known as Lillie (or Lily) Langtry and nicknamed “The Jersey Lily”, was a British-American socialite, actress and producer.
Born on the island of Jersey, upon marrying she moved to London in 1876.
Her looks and personality attracted interest, commentary, and invitations from artists and society hostesses,
and she was celebrated as a young woman of great beauty and charm.

Seymour Hicks, actor (1871–1949)
Sylvestra Le Touzel, actor (b. 1958)
Sylvestra Le Touzel (born 1958) is a British television, film and stage actor who was born on Jersey in the Channel Islands and raised in Kensington, London
Beginning as a child actor, Le Touzel’s first television role was in the Doctor Who story The Mind Robber, playing one of the children who bedevil the Second Doctor and his companions in the Land of Fiction. She co-starred in the BBC Schools “Look and Read” series, playing Helen in their cult serial The Boy from Space (1971).

Will Smith, British comedian, actor and writer (b. 1971)
William James Smith (born 8 June 1971) is an English stand-up comedian, screenwriter, novelist, actor and producer.
As co-writer and co-producer of the critically acclaimed HBO sitcom Veep, he was among the recipients of two Emmys and two Writers Guild of America Awards, and has received nominations for the Golden Globe Award and the Producers Guild of America Award for Best Episodic Comedy

Tonicha Jeronimo, actress (b. 1977)
Tonicha Lawrence (née Jeronimo; born 4 November 1977) is a British actress, born in Jersey, of partial Portuguese extraction. She starred on the show Emmerdale from 1994–97.

Henry Cavill, actor (b. 1983)
Henry William Dalgliesh Cavill (born 5 May 1983) is a British actor. Cavill began his career starring in the film adaptations of The Count of Monte Cristo (2002) and I Capture the Castle (2003).
Cavill gained further prominence and international fame playing Superman in the DC Extended Universe, starting with the 2013 reboot Man of Steel, and reprising the role in Batman v Superman: Dawn of Justice (2016) and Justice League (2017). The first two became the highest-grossing Superman films of all time. 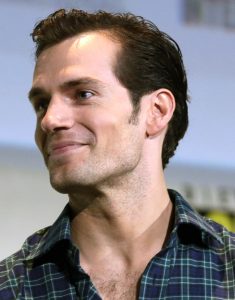 Jonny Labey, actor (b. 1993)
Jonny Labey is a British actor best known for playing Paul Coker in the BBC soap opera EastEnders.
Labey’s first role after leaving EastEnders is as the lead character, Rupert Brooke, in the play Verge of Strife, staged in Edinburgh in August 2016. In 2017 he was a contestant on ITV’s Dance Dance Dance. 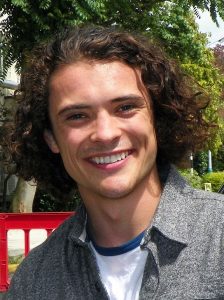 Edward Bartley, architect (1839–1919)
Edward Bartley was born on the 23rd of February 1839 to Robert and Elizabeth ‘Betsy’ Bartley (née Benest) in Saint Helier, Jersey, Channel Islands.
Trained as a carpenter and joiner, he worked as a builder for contractor Mr. E.I. Matthews, a retired officer of the Royal Engineers Department, this employment involved construction of a number of Government buildings when he arrived in the colony. During the 1870’s Bartley established himself as a skillful builder – it was not uncommon at the time for a builder to do architectural design, and he shifted from a career as a builder to a fruitful career as an architect, designing over 20 churches by 1901. Bartley’s designs can be located all throughout the North Island of New Zealand and his influence extended to the next generation of New Zealand architects, notably Keith Draffin and Gerard Jones.

David Kirch, property developer, collector and philanthropist (b. 1936)
Sir David Roderick Kirch, KBE (born 1936) is a British businessman, collector, and philanthropist.
Over his lifetime Kirch built up and subsequently sold what was probably the world’s largest collection of Zeppelin memorabilia and a collection of provincial bank notes said to be “the most extensive selection of iconic and historical notes of this series ever assembled” by Barnaby Faull, Head of Spink’s Banknotes department.
In 2006, Kirch celebrated his 70th birthday by announcing his plans to give everyone in Jersey, aged 70 or over, £100 in vouchers to spend in the island’s Co-op supermarkets. He has continued to give away around £1m, along the same lines, each year since 2006.
In 2012, Kirch announced his plans to leave his fortune, of approximately £100m, to the David Kirch Charitable Trust.
In 2013, he appeared at the top of The Sunday Times Giving List and was appointed Knight Commander of the Order of the British Empire (KBE) in the 2013 Birthday Honours for “services as a philanthropist to senior citizens of Jersey”.

Simon Nixon, founder of Moneysupermarket.com, moved to Jersey in 2013 (b. 1967)
Simon Justin Nixon (born August 1967) is an English billionaire businessman, the co-founder of and former deputy chairman of Moneysupermarket.com.
Moneysupermarket was established in 1993 by Nixon, at the time a student at Nottingham University, and Duncan Cameron as a provider of off-line mortgage information to Independent Financial Advisors under the name Mortgage 2000 and in 1999 launched moneysupermarket.com providing on-line mortgage information. Since then the business has been developed to provide credit card and personal loan information. Nixon is currently the second largest shareholder in the company, behind Capital Group.

Nerina Pallot, singer-songwriter (b. 1974)
Nerina Natasha Georgina Pallot (born 26 April 1974) is a British singer, songwriter and producer, who has released five albums and over a dozen EPs. She was nominated for British Female Solo Artist at the 2007 BRIT Awards and nominated for an Ivor Novello Award for “Sophia” in the category of ‘Best Song (musically and lyrically)’ in the same year. 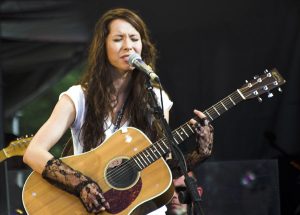 Gerald Durrell, conservationist, author (1925–1995)
Gerald Malcolm Durrell, OBE (7 January 1925 – 30 January 1995) was a British naturalist, zookeeper, conservationist, author and television presenter. He founded what is now called the Durrell Wildlife Conservation Trust and the Durrell Wildlife Park on the Channel Island of Jersey in 1959. He wrote a number of books based on his life as an animal collector and enthusiast. The most famous is “My Family and Other Animals”, which has become a modern classic. He was the youngest brother of novelist Lawrence Durrell. 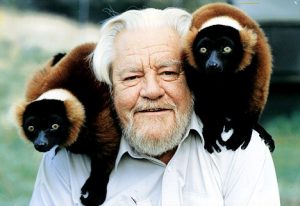 Henry Patterson (born 27 July 1929), known by his pen name Jack Higgins, is a British writer and novelist. He is one of the best-selling authors of popular thrillers and espionage novels. His breakthrough novel The Eagle Has Landed (1975) sold over 50 million copies and was adapted into a successful film by the same title.

Roger Drew, screenwriter (b. 1971)
Roger Drew is a British illustrator and television screenwriter, and was educated at Victoria College, Jersey. He has written material for TV shows such as The Thick of It and won an Emmy for his work on Veep.

Lee McGeorge Durrell, naturalist, author (b. 1949)
Lee McGeorge Durrell MBE (née Wilson) (born September 7, 1949) is an American naturalist, author, zookeeper and television presenter, best known for her work at the Jersey Zoological Park in the British Channel Island of Jersey with her late husband Gerald Durrell, and for co-authoring books with him.

Derek Warwick, racing driver, businessman (b. 1954)
Derek Stanley Arthur Warwick (born 27 August 1954) is a British former racing driver from England, who lives in Jersey. He raced for many years in Formula One, collecting four podiums but never winning a Grand Prix. He did, however, win the 1992 24 Hours of Le Mans and 1992 World Sportscar Championship.
In 2005 and 2006 he raced in the inaugural season of the Grand Prix Masters formula for retired Formula One drivers. He has served as the fourth steward for three Grands Prix in 2010 and 2011. He is president of the British Racing Drivers Club, succeeding Damon Hill.

Harry Vardon, professional golfer (1870–1937)
Henry William “Harry” Vardon (9 May 1870 – 20 March 1937) was a professional golfer from the Bailiwick of Jersey. He was a member of the Great Triumvirate with John Henry Taylor and James Braid. Vardon won The Open Championship a record six times and also won the 1900 U.S. Open.

Nigel Mansell, racing driver (b. 1953)
Nigel Ernest James Mansell, CBE ( born 8 August 1953) is a British former racing driver who won both the Formula One World Championship (1992) and the CART Indy Car World Series (1993). Mansell was the reigning F1 champion when he moved over to CART, becoming the first person to win the CART title in his debut season, and making him the only person to hold both the World Drivers’ Championship and the American open-wheel National Championship simultaneously.